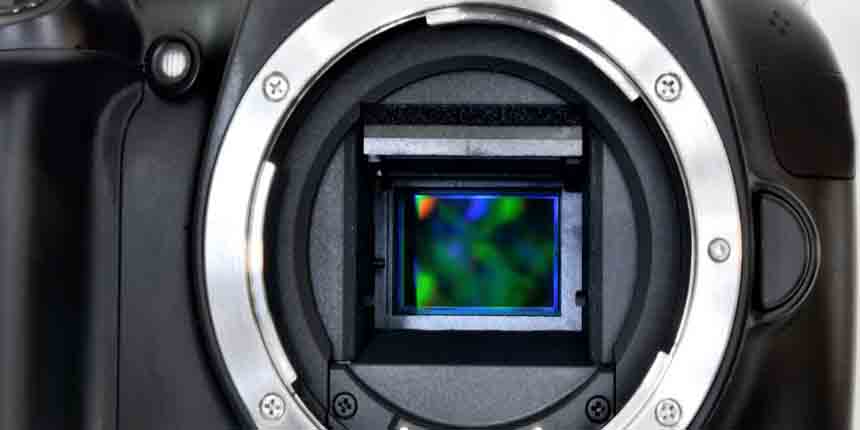 A sensor is a solid-state device which captures the light required to form a digital image. It does so by converting the variable attenuation of light waves (as they pass through or reflect off objects) into signals, small bursts of current that convey the information. The waves can be light or other electromagnetic radiation. Image sensors are used in electronic imaging devices of both analog and digital types, which include digital cameras, camera modules, medical imaging equipment, night vision equipment such as thermal imaging devices, radar, sonar, and others.

Both CCD and CMOS imagers use metal-oxide semiconductors, and they have about the same degree of sensitivity to light.

CCD sensor: Captures photons as electrical charges in each photosite (a light-sensitive area that represents a pixel). After exposure, the charges are swept off the chip to an amplifier located in one corner of the sensor. External circuitry converts the analog signal to digital form and handles storing it on your memory card.

CMOS sensor: Includes solid-state circuitry at each and every photosite, and can manipulate the data for each pixel right in the sensor. The CMOS sensor can respond to lighting conditions in ways that a CCD can’t. Every photosite can be accessed individually.

Foveon X3 sensor: Foveon X3 is based on CMOS technology and used in Sigma’s compact cameras and DSLRs.The Foveon X3 system does away with the Bayer filter array, and opts for three layers of silicon in its place.Shorter wavelengths are absorbed nearer to the surface while longer ones travel further through.As each photosite receives a value for each red, green and blue colour, no demosaicing is required.

LiveMOS sensor: LiveMOS technology has been used for the Four Thirds and Micro Four Thirds range of cameras.LiveMOS is claimed to give the image quality of CCDs with the power consumption of CMOS sensors.

THE COMPONENTS OF A DIGITAL CAMERA’S IMAGE SENSOR
All digital cameras’ image sensors are made up of the same components. These components help determine how your camera’s sensor records light and therefore how your image appears. Each sensor includes these components (shown in this figure):

Color filters: Give the color-blind CCD or CMOS sensor chip the ability to respond to various colors of light.

Microlenses: These tiny lenses focus the incoming light onto the photosensitive area in each photosite.

A protective transparent layer: This layer contains two filters, including an anti-aliasing filter that smoothes out the incoming light signal by eliminating certain frequencies of light before they can clash and an infrared cutoff filter that removes most of the infrared light from the illumination reaching the sensor (because “IR contamination” can affect image quality and produce off-color colors).

Full Frame – 36 x 24mm
The largest sensor size found in 35mm DSLRs. It shares its dimensions with a frame of 35mm negative film, and so applies no crop factor to lenses. It used to be the reserve of very high-end cameras, for professionals only, but the technology is getting more affordable. It also used to be true that full-frame sensors could only be found in very large cameras, but some manufacturers have found ways to shrink camera sizes while keeping a large sensor.

APS-H – 28.1 x 18.7mm
This type of sensor was featured in Canon’s older 1D series of cameras. These typically combine the slightly larger sensor with a modest pixel count for speed and high ISO performance, and apply a 1.3x crop factor to mounted lenses. The crop factor was useful for shooting sport and wildlife as it effectively lengthened the lens you were using, but the sensor size has since been discontinued.

APS-C – 23.6 x 15.8mm (varies)
The most common sensor size in consumer and semi-professional DSLRs, the APS-C sensor applies a crop factor between 1.5x to 1.7x to mounted lenses. It’s also found in Sony compact system cameras, and even some compact cameras.

As used in both Four Thirds DSLRs and Micro Four Thirds models, these are roughly a quarter of the size of a full-frame sensor. Their size results in a 2x crop factor, doubling the effective focal length of a mounted lens.

These sensors have become very popular in recent years, especially in premium compact cameras. They offer a sensor which is much larger than a conventional compact camera, but still small enough to fit in pocket friendly devices.

Previously, this was usually the largest sensor size you’d find in compact cameras, they’re still bigger than sensors used in budget compacts. This size is relatively rare nowadays, as most manufacturers jump to a one-inch format sensor for their premium offerings.

Among the smallest size of sensor used in today’s compacts. While cheaper to manufacture than larger varieties the smaller pixels aren’t quite as efficient, giving rise to noisy images and a reduced dynamic range.