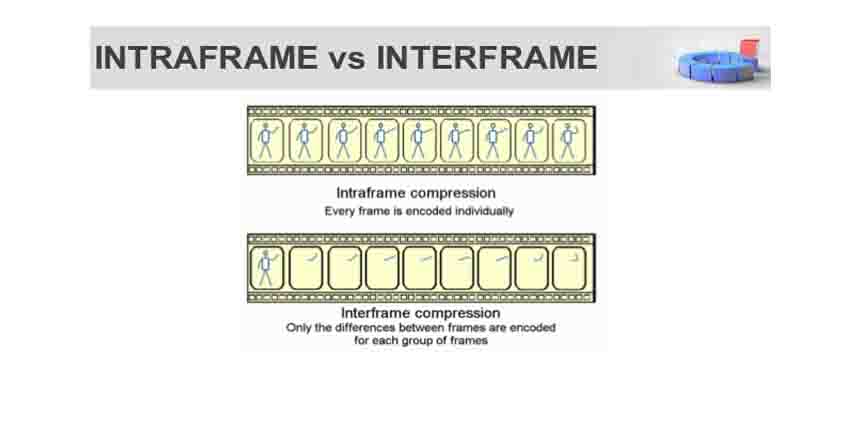 1. When you take a still picture and compress it, you are applying an intraframe codec. There is only one frame, and you are analyzing the data within this frame to compress it. Nothing more, nothing less.

2. But wait, if the individual frames are saved as separate files, they are called image sequences, just like many JPEGs in a folder. Some popular image sequence formats are.

4.Video is nothing but a stream of images called frames. In film-land, each second holds 24 frames. Computer scientists realized that if video is always going to have more than one frame, then why not look at every frame before compressing one frame

5. The immediate problem with this is, if the video is long, like a movie – looking at every frame is madness. The scenes and imagery changes anyway. So why not look at a few frames before and after each frame and then compress them all together

8.Imagine a person standing in an assembly line getting compressed intra-frames one at a time. He or she unwraps each frame and passes it on. Then the second frame is pulled up and so on.

9.In an interframe codec, when a frame is pulled up, the person has to look at the frame before it, and after it and then decide how to unwrap it – before unwrapping it.

10.If an interframe codec sits on the timeline and is sliced, the application will have to calculate its effect on the frames before and after it. It will have to re-draw the frames and put everything in order before the unwrapping can happen