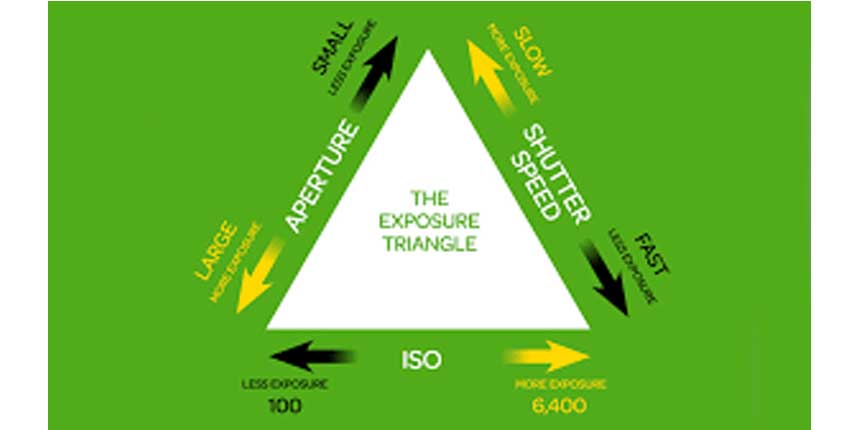 1.In photography  exposure determines how light or dark an image will appears when its image captured by camera.

2. In photography exposure  is the amount of lighy per unit area ( the image planes illuminance time the exposure time)  reaching a photographic film or electronic imagr sensor as determines by shutter speed and aperture and sence luminance

3. Exposure  is measured in lux seconds and  can be computed from exposure value (EV) and scence luminance in a specified region.

4.In photography, the exposure settings of aperture, shutter speed and ISO speed are analogous to the width, time and quantity discussed above. Furthermore, just as the rate of rainfall was beyond your control above, so too is natural light for a photographer.

5. The exposure is controlled by the camera's light meter. The light meter determines what the proper exposure is; it all sets the f-stop and shutter speed. The f-stop is a fraction; the f represents the focal length. The f-stop is determined by dividing the focal length by the aperture. f/2.8 would be 1/2.8 versus f/16 which would be 1/16. If you look at it like slices of a pie, you would get a lot more pie with 1/2.8 than you would with 1/16.

7. If you ever shot 35mm slide film, you know that it was essential to get a good exposure in-camera. Slide film was not forgiving, as opposed to negative film, which was forgiving, that is, your exposure could be “off” by a stop or two over or under the correct exposure and you could still make a good print.

8. In photography, exposure is a critical element that determines what is actually recorded on a camera's image sensor. There are three adjustable elements that control the exposure - ISO, Aperture, and Shutter Speed.

10. Sometimes you might want your picture to be slightly over (lighter) or underexposed (darker), and this is where the exposure compensation feature really starts to shine. If you notice that your images aren’t coming out quite as light or as dark as you want them, you can either change the aperture, shutter, or ISO yourself.