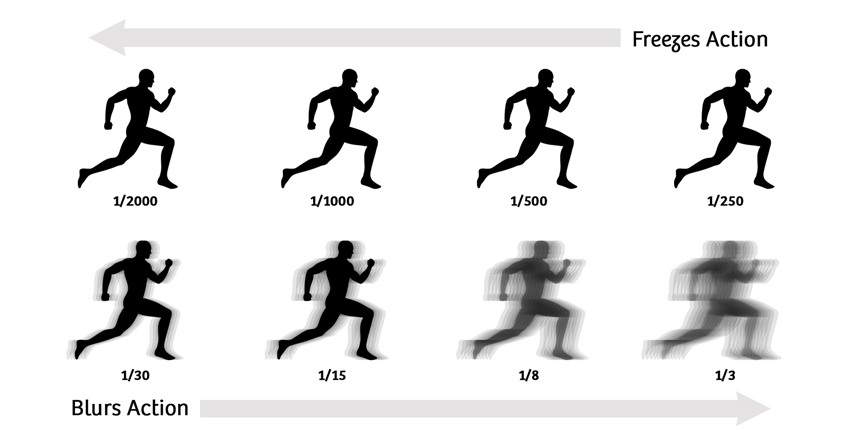 1 Shutter speed is measured in seconds – or in most cases fractions of seconds. The bigger the denominator the faster the speed ( 1/1000 is much faster than 1/30).

2    In most cases you’ll probably be using shutter speeds of 1/60th of a second or faster. This is because anything slower than this is very difficult to use without getting camera shake. Camera shake is when your camera is moving while the shutter is open and results in blur in your photos.

3   If you’re using a slow shutter speed (anything slower than 1/60) you will need to either use a tripod or some type of image stabilization (more and more cameras are coming with this built in).

4   Shutter speeds available to you on your camera will usually double (approximately) with each setting. As a result you’ll usually have the options for the following shutter speeds

6 Some cameras also give you the option for very slow shutter speeds that are not fractions of seconds but are measured in seconds (for example 1 second, 10 seconds, 30 seconds etc).

7 These are used in very low light situations, when you’re going after special effects and/or when you’re trying to capture a lot of movement in a shot. Some cameras also give you the option to shoot in ‘B’ (or ‘Bulb’) mode. Bulb mode lets you keep the shutter open for as long as you hold it down.

8  When considering what shutter speed to use in an image you should always ask yourself whether anything in your scene is moving and how you’d like to capture that movement..

10   To freeze movement in an image (like in the shots of the birds above and the surfer below) you’ll want to choose a faster shutter speed and to let the movement blur you’ll want to choose a slower shutter speed. The actual speeds you should choose will vary depending upon the speed of the subject in your shot and how much you want it to be blurred.