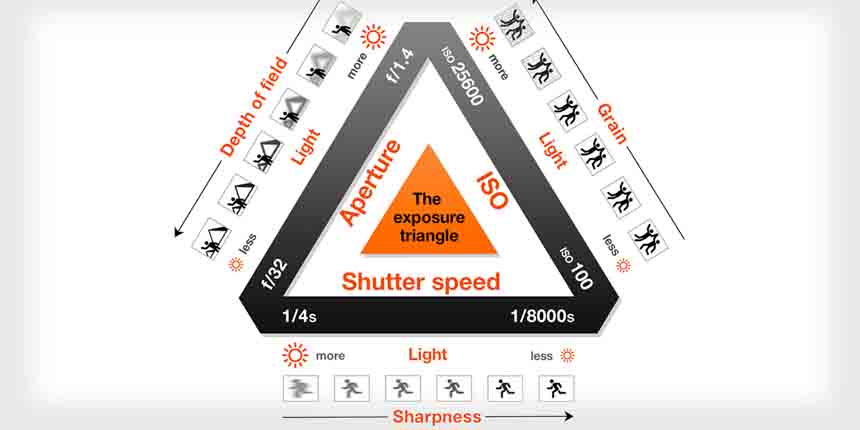 Exposure is the amount of light collected by the sensor in your camera during a single picture.Exposure is measured in lux seconds, and can be computed from exposure value (EV) and scene luminance in a specified region. The aperture, shutter speed and ISO, work together to provide enough light for your brain (the camera) to record what you see. You need the right combination of these 3 components to have perfect exposure

To understand Exposure precisely lets break down this topic into some points, here we go,

a. Exposure Traingle:- There are three main ingredients to good exposure: Aperture, Shutter Speed, and ISO.This is also known as Exposure Triangle.

b. Light Meter:- The exposure is controlled by the camera's light meter. The light meter determines what the proper exposure is; it all sets the f-stop and shutter speed. The f-stop is a fraction; the f represents the focal length.

c. F-Stop:- "F-stop" (also called "f-number") means fraction and the f-number is the fraction of the actual opening in the lens compared to the focal length of the lens. The aperture is the opening light passes through.

d. Over-Expose:- A photograph may be described as overexposed when it has a loss of highlight detail, that is, when important bright parts of an image are "washed out" or effectively all white, known as "blown-out highlights"

e. Under-Expose:- A photograph may be described as underexposed when it has a loss of shadow detail, that is, when important dark areas are "muddy" or indistinguishable from black.

f. Manual Mode:- In manual mode, the photographer adjusts the lens aperture and/or shutter speed to achieve the desired exposure. Many photographers choose to control aperture and shutter independently because opening up the aperture increases exposure

g. Autometic Mode:- A camera in automatic exposure (abbreviation: AE) mode automatically calculates and adjusts exposure settings to match (as closely as possible) the subject's mid-tone to the mid-tone of the photograph.

h. Reciprocity:- An important principle of exposure is reciprocity. If one exposes the film or sensor for a longer period, a reciprocally smaller aperture is required to reduce the amount of light hitting the film to obtain the same exposure.

i. Determining exposure:- The Zone System is another method of determining exposure and development combinations to achieve a greater tonality range over conventional methods by varying the contrast of the film to fit the print contrast capability.