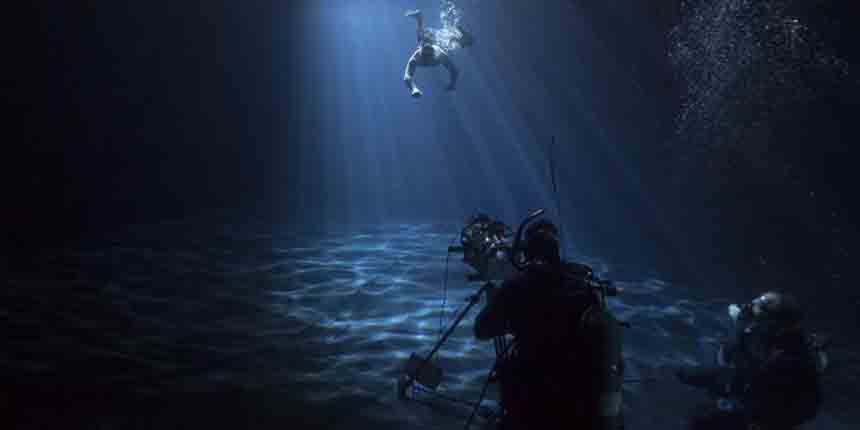 1. Well, shooting underwater is the challenge. We had this amazing inspiration photograph we were working from, but we wanted to do ours with motion. And in order to feel all of the minute elements and macro details under the water, you want to go as slowly as possible — 120 frames per second isn’t going to cut it. You’re talking 500 to 1,000 frames if you really want to feel it.

3.Large-format cameras weigh 100 pounds. Filming underwater adds another 150 pounds for the camera's waterproof housing. True, filming underwater lightens the load, but the sheer bulk of the camera makes it very difficult to maneuver. Size generates momentum and currents and waves buffet the camera, making it harder to control than smaller cameras.

4. The film magazines, which each weigh 10 pounds, contain only three minutes of film. Greg Mac Gillivray, the Producer/Director of Dolphins, chose to film several of the underwater sequences in slow motion to capture the beauty of dolphin physiology and movement.

6. One of the most memorable moments for cinematographer Bob Talbot was not when he photographed a beautifully poised dolphin in dramatic lighting; it was when the camera and housing slid down the boat transom, into the water, narrowly missing the waiting cinematographer

7. Another challenge for the underwater film team in the Bahamas was to be in clear water with cloudless skies so there would be enough light for the scene. "We were jumping in holes between clouds," described Talbot. Fortunately, most of the cinematography for the film occurred within 30 feet of the ocean's surface. Because natural lighting extends to those depths, artificial lighting was not necessary.

8. Light interacts with water differently than it does with air. Part of that science means that reds are lost first as you descend into water. So here's a little trick I use when shooting video underwater: once you're at depth, aim your camera upwards and use the (hopefully) glassy surface of the water to adjust your white balance manually.

9. Your camera and housing together will either be postively buoyant (it wants to float up) or negatively buoyant (your gear sinks). Ideally you want it to be neutrally buoyant, meaning it just kind of hovers and hangs out next to you at the depth you're shooting at.

10. You'll want to make sure your housing is strong enough to withstand whatever depth-based pressure it will be subjected to, this is of course a huge deal if you're SCUBA diving and dealing with increasing water pressure as you descend. Make sure to check the manufacturer's specifications to see what depth the housing is rated to perform at.