Video file format and it's types 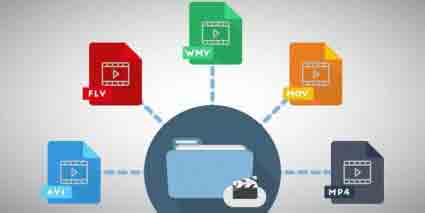 A Video File Format is a type of file format for storing digital video data on a computer system. Video is almost always stored in compressed form to reduce the file size.A video file normally consists of a container (e.g. in the Matroska format) containing video data in a video coding format (e.g. VP9) alongside audio data in an audio coding format (e.g. Opus). The container can also contain synchronization information, subtitles, and metadata such as title. A standardized (or in some cases de facto standard) video file type such as .webm is a profile specified by a restriction on which container format and which video and audio compression formats are allowed.

A normal video file in a digital format is made up of two parts, a “codec” and a “container”. A “codec” is used to compress and decompress a video file, as there are times where video files are too large and may cause difficulty when trying to download or play the file. Some examples of “codecs” are FFMpeg, DivX, XviD, and x264. A “container” is a collection of files that stores information about the digital file. It simply means there is a combination of both audio and video data in a single file to allow for simultaneous audio-with-video playback. Some popular types of “containers” are AVI, FLV, WMV, MP4, and MOV.

Importance of Codecs, and Containers

In order to compress a video, your file must also have a corresponding codec. A codec is a software that compresses your video so it can be stored and played back. The most common codec includes h.264, which is often used for high-definition digital video and distribution of video content. It is also important to note the bit rate, which refers to the amount of data stored for each second of media that is played. The higher the bit rate, the less compression, which results in overall higher quality. However, be aware that the higher the bit rate, the larger the file size

Developed by Microsoft and introduced to the public in November 1992 as part of its Video for Windows technology, the AVI format is one of the oldest video formats. It is so universally accepted that many people consider it the de facto standard for storing video and audio information on the computer. Due to it’s simple architecture, AVI files are able to run on a number of different systems like Windows, Macintosh, Linux; is also supported by popular web browsers. AVI files stores data that can be encoded in a number of different codec’s, although most commonly with M-JPEG or DivX codecs. This means that all AVI files, while they may look similar on the outside, differ substantially from one another on the inside.

FLV files are videos that are encoded by Adobe Flash software, usually with codecs following the Sorenson Spark or VP6 video compression formats. They can be played via the Adobe Flash Player, web browser plugins or one of several third party programs. Since virtually everyone has the player installed on their browsers, it has become the most common online video viewing platform used on the Web today. As almost all video sharing sites such as Youtube stream videos in Flash, practically all browsers support and are compatible with the Flash Video format and can play the video with ease.

Developed by Microsoft, WMV was originally designed for web streaming applications, as a competitor to RealVideo, but it can now cater to more specialized content. WMV files are the tiniest video files over the Web, as their file size decreases significantly after compression, which results in poor video quality.

Developed by Apple. Inc, the QuickTime file format is a popular type of video sharing and viewing format amongst Macintosh users, and is often used on the Web, and for saving movie and video files. In recent years, Apple came up with a newer version called QuickTime X, currently available on Mac OS X Snow Leopard, Lion and Mountain Lion.

MP4 is an abbreviated term for MPEG-4 Part 14, a standard developed by the Motion Pictures Expert Group who was responsible for setting industry standards regarding digital audio and video, and is commonly used for sharing video files on the Web. First introduced in 1998, the MPEG-4 video format uses separate compression for audio and video tracks; video is compressed with MPEG-4 or H.264 video encoding;

.OGG files are an open-source alternative to MPG files, and are used for high-quality videos to be streamed via the internet. Though OGG files are used for streaming, they are higher in quality than WEBM files – meaning they will take longer to be delivered to the end-user. Due to .OGG files being open sourced, they can be used in a variety of applications, including GPS receivers and media players (both desktop and portable).